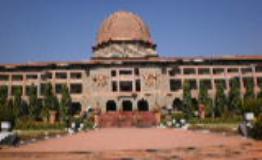 National Defence Academy is a premier joint training Institution and center of excellence for producing junior leaders, for the Indian armed forces, and armed forces of friendly foreign countries. The training entails equipping the cadets with mental, moral and physical attributes required to cope with the challenges of the future battle field with the aim of leading troops to victory in conventional, non-conventional and asymmetrical conflicts.

NDA imparts training to young men, who choose the Armed Forces as their vocation. They are given an intensive education in Science, Technology, Arts and Military subjects. At the end of their three-year course, which is split into six terms, a cadet is awarded a Bachelor’s Degree from the Jawaharlal Nehru University. While a cadet is being prepared intellectually to face the forthcoming challenges of high technology on tomorrow’s battle-field, he is also physically and mentally toughened by a rigorous regimen of physical conditioning which includes drill, swimming, horse-riding and the full gamut of games and sporting activities. In the three years at the Academy, he is transformed from a cadet into a potential officer and a gentleman.

The Academy also trains cadets from friendly foreign countries who take advantage of their training in the NDA to become military leaders in their own countries. 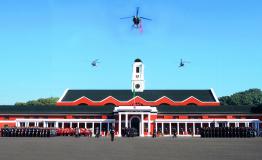 The academy is located in the foothills of the Himalayas, about 8 km west of Dehradun in the northern Indian state of Uttarakhand. The campus is on National Highway 72, which separates the North and South Campus. The campus of the academy originally spanned 206 acres which was transferred to the academy along with existing buildings from the Railway Staff College. The academy area is 1,400 acres (5.7 km2).

Built in 1930, the Chetwode Hall on the Drill Square houses the administrative headquarters of the IMA and is also the hub of academic training. It has lecture halls, computer labs and a cafe. On the opposite side of the Drill Square is the Khetarpal Auditorium. Inaugurated in 1982, it has a seating capacity of over 2000.

A newer wing of the Chetwode Hall, added in 1938, houses the Central Library. It has over 100,000 volumes and subscriptions to hundreds of periodicals from across the world, besides multimedia sections. In addition, there are two branch libraries closer to the cadet barracks across the campus.

The Commandant’s residence is a handsome colonial structure with a landscaped 6 acre garden. It offers a panoramic view of the Tons River silhouetted by the Himalayas.

The IMA helipad is located in the Tons Valley in the northwest of the campus.[6]

The North Campus includes the Polo Ground along the Tons River. The Tons Valley to the Northwest of the campus is bounded by the forks and bends of the Tons River. It is used for para-dropping and para-gliding, besides battle training.

The IMA War Memorial, with its pillars and columns of Dholpur stone, pays homage to the alumni of the academy who have fallen in the course of action. At the sanctum sanctorum of the memorial is a bronze statue of a Gentleman Cadet with a sword presenting arms. The memorial was inaugurated by Field Marshal Manekshaw on 17 November 1999, just weeks after the Kargil War. IMA officers led and fought in the war, with some of them becoming household names in India for their gallantry. Among their ranks were two Param Vir Chakra recipients and eight Maha Vir Chakra recipients.

A trainee on admission to the IMA is referred to as a Gentleman Cadet. One reason for this is that the academy expects its graduates to uphold the highest moral and ethical values. Inscribed in the oak panelling at the Eastern entrance of the Chetwode Hall is the academy’s credo, excerpted from the speech of Field Marshal Chetwode at the inauguration of the academy in 1932: 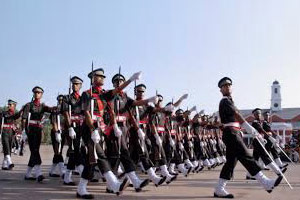 The freshman GCs hail from diverse backgrounds with multifarious habits and grooming. The Academy plays a vital role in moulding those differences and helps them anchor into a common bonding. Doing things together bring a sense of fellow feeling. No GC gets preferential treatment, all are allowed to shape up together; together they break bread, together they play and together they receive the same kind of training. This bonding helps them to develop values such as camaraderie, espirit de corps and oneness that go a long way to give a separate identity to the corps of officers in the Army.

It is simply that the future officers are made to acquire the finer graces of life and living which invests them with a personal dignity and a sense of appreciation for those finer pursuits which distinguish man and civilization. IMA encourages a Gentlemen Cadet to reflect on the greatness of India’s diversity, her secular foundation and to honour the traditions and customs of the Army. In a nutshell, IMA habitat helps him to become a rounded personality.

From grueling route-marches to photography, painting, seminars, term-papers, tours and sports, the training is an action filled scenario nurturing their mental and physical potential. Each and every GC is allowed equal space for growth within the given time frame. The pace of training at the Academy is fast and intense. Therefore, it is no wonder that it becomes a test of one’s mettle and capabilities, and in psychological terms a foretaste of what the trainees would face in the battlefield where there is no room or no scope of explanation and rationalization for failures. The completion of training is therefore, a sort of self-assessment which awakens and activates one’s self-esteem, sense of honour and dignity. A GC learns a great deal of values of life during his short stay in the Academy. 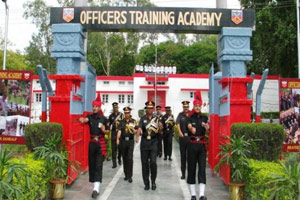 Officers Training Academy or OTA Chennai is a premier institute of Indian Army for training Men and Women into officers for the Short Service Commission into Indian Army. This institute holds a great importance as it has been giving able officers to Indian Army since a long time. The difference between IMA and OTA is that while IMA trains men for Permanent Commission, all men and women for Short Service Commission are trained in Officers Training Academy (OTA). The Academy is located amid a sprawling estate of 650 acres traversed by River Adyar adjoining the Chennai International and Domestic Airport, about 15 kms from the Chennai Central Railway Station along the Grand Southern Trunk (GST) Road in Chennai.

The history of Officers Training Academy (OTA) dates back to World War II, when seven Officer Training institutes established in India. However these schools were closed down after the war. In 1962 after the war with China, India felt the need to establish Institutes to train more officers for Indian Army, two officers training schools were established as a result, one in Chennai (then Madras) and one in Pune. These Officer Training School (OTS) were established with the motive to cater officers for the emergency commission.

The first Emergency Commission (EC) course began with a complement of 442 young Indians. Their training began in this prestigious institution on 15 Jan 1963. Brig Ram Singh the first Commandant along with Shri C Subramaniam, the then Union Minister for Steel and Heavy Industries, formally inaugurated it with an inspiring speech that has proved prophetic time and again. The Emergency Commission courses continued till April 1965 and EC–12 was the last course to pass out. When the Emergency Commission Courses were discontinued, OTS started training Gentlemen Cadets for Short Service Commission (SSC). The scheme also included SSC Course (compulsory liability scheme) for Class I and II Gazetted Officers of the Central Government and Public Undertakings. The scheme ended in 1968 when SSC courses for Technical Arms and Services were introduced. In the seventies few essential infrastructural developments like Swimming Pool, Auditorium, Science Block and Laboratories, Drill Square, Cadets Mess; Weapon Training sheds were created to facilitate GC’s training. 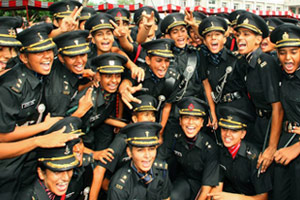 In 1985, the institution was granted permanent status and proposal was sent to convert the School to an Academy. The much awaited approval from Army HQ was received on the New Year’s Eve. A Special Sainik Sammelan was held on 01 January 1988 in the auditorium as a part of the Silver Jubilee Celebrations, where Maj Gen N Vishwanathan, the then Commandant, announced this significant re-naming from OTS to the Officers Training Academy (OTA), placing the Academy at par with the Indian Military Academy and the National Defence Academy.

With due course of time, when women were taken in Indian Army as commissioned officers, OTA has trained them as well into able officers of Army. The first batch of women consisting of 25 candidates was trained by OTA, the training began on 21 September 1992. OTA excels in providing real life atmosphere for training. It is well equipped to train officers for Counter Insurgency operations giving a real jungle lane shooting range and grenade lobbing area.

Officers for all kinds of job who have been appointed for SSC are trained here, be it administrative jobs, technical jobs or JAG entry etc. OTA has been an honor for India, giving able officers to the Army. It is indeed a dream of many to join this institute, keep working hard as dreams do come true! 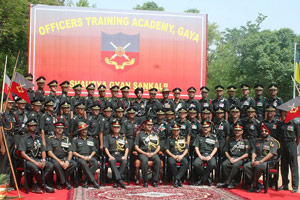 OTA Gaya, raised in July 2011, is the third pre-commission training (PCT) academy of the Indian Army with a planned training capacity of 750 cadets. The aim of the academy is to train Gentlemen Cadets to become part of a professionally competent commissioned officer corps of the Indian Army. The academy is located amid an estate of approx. 870 acres in a hilly terrain of Paharpur at Gaya.

To mark the commencement of the academy, a flag hoisting ceremony was solemnized and the consecration of the raising of the academy was carried out in true secular tradition of the Indian Army, with recital of scriptures from holy books of different religions. The academy has been equipped with state of the art training facilities, at par with other pre-commissioning training institutions. The insignia of Officers Training Academy, Gaya has a two-color background, with upper half as grey and the lower half blood-red, having two cross swords superimposed with the Dharmchakra. A scroll below bears the motto of the academy – ‘Shaurya, Gyan, Sankalp’ in Devnagri. 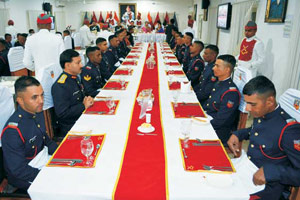 OTA Gaya is meant to train the cadets of 10+2 TES and SCO entry Army in their pre-commissioning training. Here is how you can join OTA Gaya:

The training commences in the month of January and July and likely SSB dates are Sept-Oct and April-May. The training is conducted in two phases